The Temple of Literature is about 10 minutes away from Hoan Kiem lake. It was constructed in 1070 under Ly Thanh Tong’s dynasty, first to honor Confucius and nowadays to celebrate the doctorates and high rank scholars of Vietnam. In 1076, King Ly Nhan Tong continued the work and built Quoc Tu Giam as the first university of Vietnam.

The temple is divided into five court yard, each with its own significance and history. The first courtyard stretches from the main gate to Dai Trung gate; the second stands out with Khue Van Cac pavilion. If you notice well, you will find the pavilion symbol on all street signs of Hanoi. The third courtyard is where doctor names was listed on a tombstone above tortoise backs.

There are a total of 82 tombstones, with names and origins of 1307 doctors, corresponding to 82 examination courses from 1442 to 1779. If you visit the temple at the beginning of the year or in May when many important examinations take place, you will catch sights of numerous students who come and rub the tortoise head. Such an act is believed to bring them luck to pass the test.

The fourth courtyard is dedicated for Confucius and his 72 honoured students, as well as Chu Van An- a famous teachers known for his devotion to teaching. This is also where local authorities choose to cherish brilliant students in Hanoi, like those with top entrance results to university or top graduation outcomes. The last and also furthest courtyard is Thai Hoc house, which used to be Quoc Tu Giam- the first university of Vietnam. Thai Hoc house holds a small collection of old time costumes for students and mandarins, as well as explaining the process of taking and passing the national examination.

If you are keen on architecture, Temple of literature has one of the most typical architecture style for centuries in Vietnam, composed of wood and tiles. Along the pass way is hundred-year-old trees that have witnessed ups and downs of history.

+ Pavilion of the Constellation of Literature

Life of the students in olden times is reflected through these artifacts and seemed to be simple and pure compared to that of the city dwellers. Van Mieu - Quoc Tu Giam (National College) now preserves 82 steles engraved with the names of 1,306 doctors who obtained the doctoral titles at 82 royal examinations, held from 1442 to 1779.

Although Van Mieu was built long ago, some architectural complexes in this area were erected much later. One of them was Khue Van Cac. In 1802, Gia Long took the throne and built the capital in Hue. In 1805, the Commander of the Northern Citadel, Nguyen Van Thanh, ordered the construction of Khue Van Cac at Van Mieu. This project was carried out at the same time as the erection of the surrounding walls around Van Mieu in 1833. 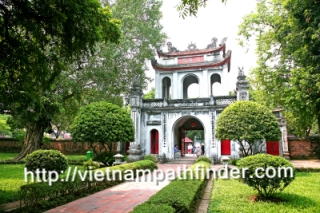 The pavilion was a two-storey complex made of wood and bricks, which is mirrored on the Thien Quang Well. Located in the third courtyard (from the front gate), the pavilions ground floor is empty with four brick pillars of 85cm x 85cm engraved with designs of clouds. The pillars stand on a square base, 6.8m x 6.8m, which is covered with Bat Trang bricks. The upper floor, made of wooden frames, stands on four brick pillars, with four round windows facing the four directions and having rays like the sun. This floor is the symbol of the brilliant constellation that is shining. The Oriental people consider this star as a symbol of literature. On this floor, the balustrade is supported by engraved wooden pieces and a gilt board with three letters of Khue Van Cac hanging on the wall.