The villages traditional renowned craft of making com is still well preserved and developed, even with the advance of technology.

Location: Vong Village is in Cau Giay District, 7km from centre of Hanoi.
Characteristic: This village is famous for com making.
A legend tells that in the autumn of a thousand years ago, there was a torrential rain accompanied by severe winds in Vong Village, on the outskirts of present-day Hanoi . At that time, the paddy was just about to ripen and the storm threatened a big loss. The villagers had to collect and dry the young rice as alternative food to avoid starvation.

Unexpectedly, the product had a such a distinct flavour and fragrance that the villagers repeated the process in later years. As a result of the fame of the young rice, this kind of food was brought to other places in the area. Then, it was much sought after by connoisseurs and was one of the villages tributes to the King of the Ly Dynasty (11th -13th century). In Vietnamese, it is called com.

Com is made from young glutinous rice, when the rice begins to ripen and still contains milk and fragrance. The villages traditional renowned craft of making com is still well preserved and developed, even with the advance of technology. The local farming industry does not supply enough rice for com; thus during the season, many villagers have to go to other framing areas near the capital to buy young rice. First, the rice is selected, thrashed, sieved and washed in large washers to eliminate the thin grains that float on the surface. At this stage, it turns to yellow from the original green colour.

To produce a kind of soft com, the rice must be pounded before the most important stage of drying in a large iron pan over a wood fire. The pounding and drying techniques are the know-how that is often kept within the household, never to be transferred to daughters. Artisans of this trade know how long the pounding and drying should last, the frequency of each pounding, how the heat of the fire should be adjusted, and the techniques of choosing good rice and good firewood. Though the village is not as busy with this activity as in the past, you still hear the sound of the pounding and smell the distinctive fragrance of com during the daytime. Pounding is not practiced during the night, so as not to interrupt peoples sleep. 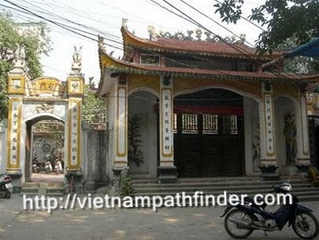 The finished product which must be soft, sweet and fragrant, then finds its way to customers in bamboo woven baskets covered with lotus leaves to keep its moisture and to lend the com the fragrance of the flower. The fragrance of com and lotus, when merged, is too attractive to resist.

Com is often eaten by hand, directly from the lotus leaves, a pinch at a time and chewed slowly to fully appreciate the flavour. It can also be eaten with persimmons or bananas or used as the ingredient for banh com (com cake), che com (sugary soup with com), cha com (pie made of pork and com) among which , banh com is the most well-known as it is used at almost every engagement ceremony. These kind of cakes are wrapped squarely with bananas leaves, tied with a red string and stamped on the out side with a Chinese character meaning "double happiness". With these characteristics, banh com is believed to be a symbol of a steadfast and eternal love. To those who have ever been engaged in farming, eating com often reminds them of a field of young fragrant paddy.

During its season, com can be seen on almost every street. The peddlers cry out loudly: "com, com...", but often it is unnecessary, as they are easily recognized by their paraphernalia: they shoulder two light bamboo baskets (com is not so heavy as other products) with lotus leaves on the top and a small bundle of paddy stems tied to the basket carriers, which are used to wrap and tie com.