Saigon or Hochiminh city, a most busy city in Vietnam, Saigon is some 2000 km away from Hanoi, this parts of Vietnam never has winter season

Saigon-Hochiminh city from the sky view

One of the earliest known records of the area now known as Ho Chi Minh City or Saigon says that it was a small fishing village called Prey Nokor, inhabited by Khmer people. In the year 1623 Vietnamese refugees fled from the civil war in Vietnam and settled in Prey Nokor (which was a part of Cambodia then) with the permission of the king of Cambodia. Gradually more Vietnamese refugees migrated to this area and this place came to be known as Saigon.
With the colonization of Vietnam by France in 1858 the city officially ceded to the French in 1859.The colonization influence this city heavily, so much so, that it was called “Paris in the Orient”. Many of the old colonial buildings and villas still stand today and hark of those times.

French architecture is also a big influence in Saigon-Hochiminh city

A meeting hall in the former Saigon head-quarter 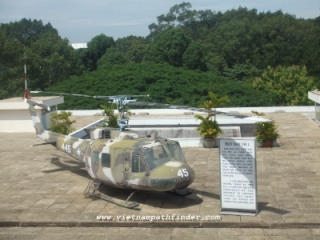 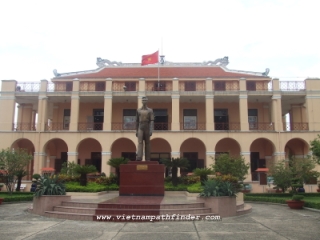 Ben Thanh Market is an indispensable part in a Saigon City tour. The clock tower over the main entrance to what was formerly known as Les Halles Centrale is the symbol of Saigon (Ho Chi Minh City nowadays), and the market might as well be, too. Ben Thanh market has long been one of Saigon’s famous landmarks. Opened first in 1914, the market is very crowded, a boon for pickpockets with its narrow, one-way aisles, and loaded with people clamoring to sell you cheap goods and postcards. There are so many people calling out to you that you will feel like the belle of the ball or a wallet with legs. Watch for pickpockets.

Out front, near the main entrance, find lots of knockoff brand-name clothes, and farther in is a number of small souvenir stands. Toward the back are a few small cafes. This food section of the market is far more interesting. The section offers a wide range of products including pickled vegetables, ducks, crab, scorpion wine, Calvin Klein knockoffs, rice, flip-flops, coffee and tea. The wet market at the far back, with its selection of meat, fish, produce, and flowers, is interesting and hassle free; no one will foist a fish on you. Even if you are not in a mood to shop, getting around the market is also a great experience. The market has cleaned itself up for the tourists over the years, which is a shame because the added hygiene comes at the cost of the market's old charm and raw authenticity. In open-air stalls surrounding the market are some nice little eateries that open just as the market itself starts closing down, and this is, in fact, one of the best places to try authentic local cuisine. The adventurous can sample good local specialties like rice dishes, noodle soup, bun dishes of vermicelli noodles, or ice cream and dessert for next to nothing.

T54 tank at the front of Saigon former palace

Saigon- - HCM city (or Saigon) or Hochiminh city at night

The tropical garden contains more than 70 species of birds and 20 species of animals. A 22-meter-high rock garden contains several waterfalls and caves, the largest cavern of which is decorated as a water palace and holds many colorful fishes. The Nam Tu royal garden features an orchidaceous garden and valuable bosai ornamental trees. The park's adventure playgrounds and activities, including slide yard, electric cars, high speed slide train, and water park, are popular with teenagers.

The park has a number of features unique in Vietnam: its 2 km monorail, affording views from five meters above the ground; adventure boats that cross the waterfall; and the unusual "Roman" square, featuring European flowers including roses, classical Roman-style stone pillars, statues, and a musical water show with 3,000 seats. This water display, located just behind the European flower garden, was built in 2005 at a cost of 12 billion dong and placed behind the Europe flower garden. It features a musical performance on a specially designed stage featuring water sparys and laser lights, with films projected onto a 28-meter-high screen of water. The technique was based on a similar display in Sentosa Island (www.sentosa.com.sg), Singapore.

Old Saigon street and life  before 1975

Old Saigon street and life  before 1975

For Saigon Trips, Please email us at: info@vietnampathfinder.com